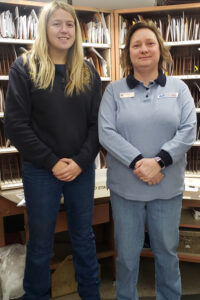 Rosenhayn, NJ, Retail Associate Hope Crumb was on her way home from work when she witnessed the accident. She stopped, called 911 and rendered aid to the contractor, who escaped from his truck before it was engulfed in flames.

Crumb accompanied the man to a hospital and stayed with him until his wife arrived.

Elmer, NJ, Rural Carrier Associate Tabitha Davis responded to the accident in her role as a volunteer firefighter.

The contractor recovered from his injuries.

The driver of the other vehicle died on the scene.