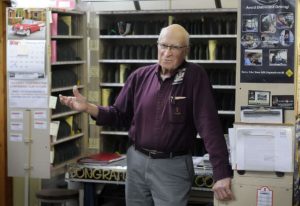 John Moore, of Martinton, hasn’t stopped working in 55 years at the Martinton Post Office on West Main Street — not even during the surprise gathering to celebrate his years of service, this past Friday morning.

Moore, 75, started his Friday morning, unsuspecting as always, by arriving to work at 8 a.m. and helping the postmaster.

While photographs still were being taken and conversation was abuzz, Moore greeted a few residents of Martinton as he gave them their mail.

Moore started working at the post office in 1963 when he was 20 years old, as a mail carrier sub for his father, Harold, and he joined the National Rural Letter Carrier Association five years later.

“I’d been sorting mail since I was 17 whether anyone knew it or not,” he recalled.

The rural post office in Martinton had been housed in various buildings, until a new brick building was built in 1960. That building still stands today.

Moore’s rural carrier route services 256 people, and he drives a burgundy, Chevrolet Lumina on his route.

Before the times of seat belts, Moore drove a 1958, two-door Ford hardtop.

“It was a runner, and it would scream from Ashkum back to Martinton,” he said.