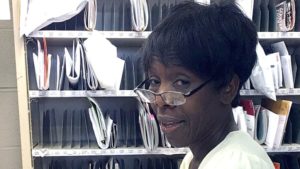 Rural Carrier Christene Wiggins was delivering mail recently in Princeton, NC, when she encountered an older customer in an unusual predicament: He was trapped in a tractor.

Wiggins attempted to free the distressed man, whose leg had somehow gotten wedged near the clutch as he was getting on the piece of farm equipment, but she was unsuccessful.

She then located the man’s daughter, who lived nearby. The woman called 911, as well as the man’s son.

Wiggins returned to the scene to await the arrival of emergency responders. She was soon joined by the son and a neighbor, and the three of them were able to release the man, who had been stuck for more than an hour.

Emergency responders later determined that he was bruised but otherwise unhurt.