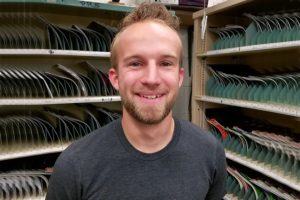 Clearfield, UT, Rural Carrier Associate Tait Francis was recently delivering mail when he spotted smoke and flames billowing from the attic of a nearby home.

Francis rushed to the front door and pounded on it until a resident answered, unaware of the calamity.

While the Postal Service employee called 911, the woman and her two teenage sons evacuated the house, which sustained extensive damage.

“Tait is always willing to help out whenever needed,” said Clearfield Postmaster Jim Stephens. “Stopping to help someone in need is just who he is.”

A neighbor later reported that an electrical malfunction started the blaze, disabling smoke detectors before they could sound an alarm.