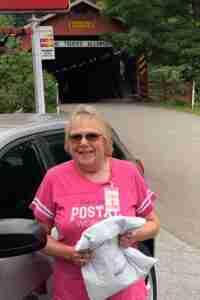 Dushore, PA, with a population of 552, is tiny by most standards.

But in Sullivan County — which is also known as the “Gem of Endless Mountains” — the town is a humming metropolis.

For starters, it has the traffic light — that’s right, there’s one light in the entire county.

And on good days, when conditions are right, you just might be able to get cellphone reception.

The town is situated between Worlds End and Ricketts Glen state parks, and the Appalachian Trail is just five miles away.

Rural Carrier Ella Barry delivers to 320 residents of the hamlet and surrounding areas.

At 115.7 miles, hers is among the longest routes in Delaware-Pennsylvania 2 District. But while the stops may be few and far between, it is a long and winding road through paradise.

The Sullivan County native has worked as a full-time rural letter carrier for about a year, but she has been with USPS “on and off” for about 16 years — all of it in Dushore, she said.

She has worked a bit in the Post Office but enjoys her daily trek, especially the waterfalls and overlooks.

“The people, the scenery … it’s kind of like being your own boss out there,” Barry said.

The rural carrier is one of several employees participating in “We Go Everywhere,” a USPS communications campaign that offers a front-row seat to some of the most beautiful and noteworthy places where letter carriers ply their trade.

Of course, it’s not all waterfalls and overlooks. Cellphone reception is spotty to nonexistent — and once when her vehicle got stuck in mud, she had no way to call for help.

She walked up the half-mile driveway of the nearest house and waited for its residents to return so she could send out her SOS on a landline.

But the benefits of living and working in Sullivan County seem to far outweigh the nuisances.

Just ask Dushore Postmaster Rodney Lawrence, who returned to his hometown in July after years spent working with USPS in Kentucky.