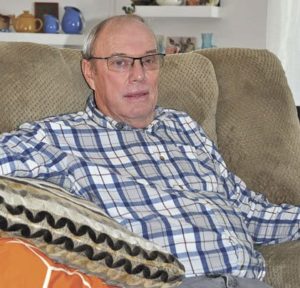 “I thought about working until Feb. 1 and then retiring. That would have given me a full 45 years working for the postal service. But I decided I really didn’t want to haul over the Christmas holidays. That’s one of our busiest times of the year. So I retired on Dec. 1 and figured I wouldn’t have to deal with the holiday rush.”

“Our deliveries following cyber Monday were up 18 percent this year,” Helgeson noted. “We used to handle six to eight packages a day before the advent of internet shopping. Now a normal day is 60 to 80 packages, with more than a hundred a day during the holidays.”

Two weeks after retiring, he was in the hospital with a digestive infection. He’s on the mend now, but his hospital stay and subsequent convalescence put a real damper on his Christmas this year.

“I should have waited until February,” he said with a laugh. “I never got sick when I was working. There were times when I could have called in sick, but when you’re starting out, you want to build that up. So I just never took sick days. I had 500 days of sick leave built up when I retired. I could have used a few of them several weeks ago.”

Helgeson began working as a rural mail carrier in the Canton area in 1973.

“I had just gotten out of the service and was hired by the postal service. When I started, I had 135 boxes. My route covered 100 miles and it was all Canton addresses,” Helgeson said.

Shortly after Helgeson started delivering mail around Canton, the Old Order Amish started moving into the area. At first, it wasn’t a big change, as there were just a few Hershberger, Yoder, Miller and Schwartzentruber families receiving mail on his route. But as the handful of Amish families grew to dozens and then close to a hundred families, it became a challenging endeavor to differentiate one Eli J. Hershberger from the next, especially when Helgeson had seven Eli J. Hershbergers on his route!

“It was really something when the first Amish arrived,” Helgeson recalled. “The railroad still serviced Canton back then and the Amish came by the train. They would have boxcars filled with their furniture, household goods and farm equipment. The Amish who were already here would help unload the boxcars and load everything up onto their horse-drawn wagons and buggies. It was quite a sight.

“Back when we just used box numbers, it was tougher to keep track of everything,” Helgeson continued. “As the Amish built more homes on a farmstead, they would have to add a box, 102-A and then a box 102-B or even C,” Helgeson noted. But once the county named all the country roads, put the numbering system into place that replaced the box numbers, it made it much easier for those sorting the mail and also for carriers delivering the mail.