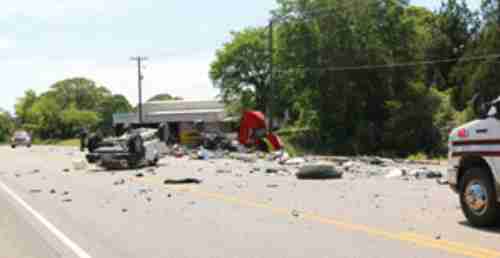 MAJOR WRECK — Dorothy Truelock, a USPS mail courier, was stopped on the improved shoulder of US Hwy 79 just north of CR 329 in a white 2015 Jeep Wrangler Unlimited on Friday afternoon, April 20th, when she was struck by a red 2004 18-wheeler driven by Kevin Banks, age 30. Banks reported that he was distracted and took his eyes off the road when a water bottle fell causing him to drift to the right. Banks abruptly steered back onto the roadway, but his trailer struck the rear of the jeep. Truelock was thrown from her vehicle and it overturned. The 18 wheeler struck the guardrail, completely uprooting several posts and hitting a power pole. Truelock, age 69, passed away on Sunday, April 22nd, at East Texas Medical Center in Tyler. Funeral Services for Dorothy will be held at 11AM on Friday, April 27th, at Ricks-Bowers Funeral Home in Jewett. Visitation will be held following the funeral service at the V.F.W. Post #3542 in Jewett.