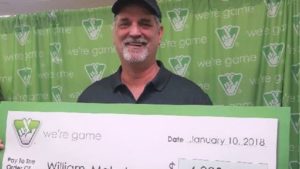 A lucky man in Loudoun County has the feeling of being one in a million Thursday. Or more precisely, one in 1,305,600, the odds of winning the top prize in the Virginia Lottery’s Hot Millions Multiplier game.

Bill Malsch, a mail carrier who lives in Purcellville, has won that $4 million top prize, according to a statement released by the Virginia Lottery.

Given the choice of $4 million over 30 years or a cash option of nearly $2.25 million before taxes, Malsch has chosen the cash option.

Malsh told lottery officials he will use the money for retirement and his children’s education.

He bought his ticket at the Shop N Save at 609 East Main Street in Purcellville. The store will be given a $10,000 bonus for selling the winning ticket.

Malsch was the second winner of the top prize. One $4 million ticket remains unclaimed, officials say.